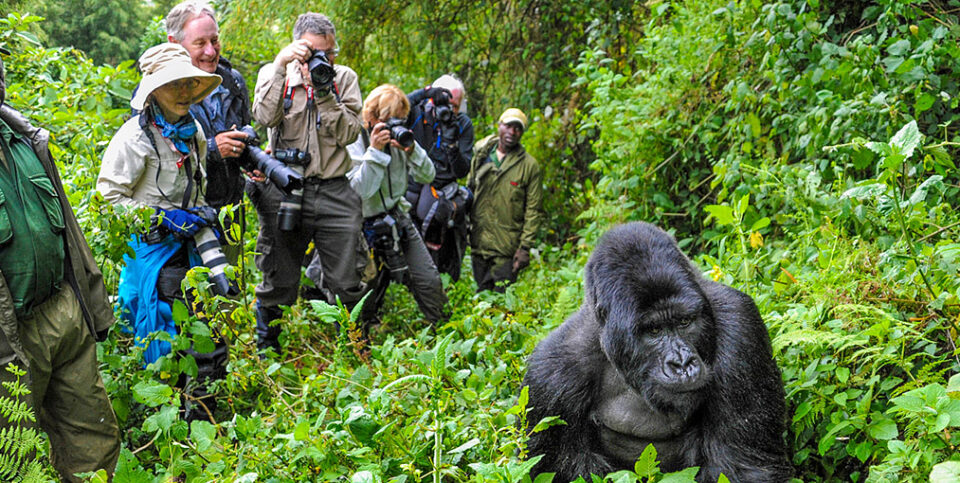 Combine two of East Africa’s most iconic wildlife experiences on a journey that includes gorilla trekking in Rwanda’s Volcanoes National Park and three days Kenya safari in the Masai Mara wilderness. Therefore, on this Rwanda Kenya Safari will take you into the deep exposure of mountain gorillas and wilderness.

Encounter some of the world’s most legendary wildlife in two very different East African habitats. Venture into the lush jungles of Rwanda’s Volcanoes National Park for a once-in-a-lifetime chance to sit among mountain gorillas with an expert and observe their behavior up close.

Then travel to the vast Savannah of Kenya’s Greater Masai Mara region and spend four full days spotting lions, elephants, giraffes, and so much more on guided safaris. Along the way, get acquainted with local culture on a tour of Kigali and a visit to a Maasai village.

Begin with three nights on the edge of Volcanoes National Park, staying at one of our favorite lodges. The jungles beyond, stretching up to the Ugandan and Congolese borders, are most famous for being home to mountain gorillas, the largest of the great apes but also one of the gentlest.

Ten groups within the park are habituated to humans, and you’ll get the chance to trek through the forest to spend a magical hour in the company of one family group as young ones play, adolescents show off and mothers dote under the watchful eye of a dominant silver back. You will also get to meet a troop of golden monkeys, another of the Virunga mountain range’s endemic primates and hike to see magnificent lakes.

Rwanda’s Volcanoes National Park is one of the few remaining havens of the mountain gorilla, with its landscape’s gentler slopes and more open bush allows for some of the most effortless tracking and observation of these animals than other parks.

After that awesome experience in Rwanda proceed to Nairobi in Kenya to also experience the Maasai Mara. Based out of a safari camp for a further four nights, spend your days out on game drives across the Mara landscape in search of iconic wildlife such as lion, cheetah, elephant, rhino and much more, walking with the Maasai, and, if you’re here between July to October, you may witness the millions of wildebeest and zebra here on the great migration.

It must not be forgotten, however, that the Maasai Mara has one of the highest concentrations of wildlife year-round. The big five can all be ticked off your list on a visit here, and you’ll also get to see huge pods of hippos basking in the rivers, cheetahs racing across the Savannah and giraffes ambling between the acacia trees. Return to Nairobi for a final night and a chance to visit a renowned sanctuary before your departure.

One & Only Resorts, A Home Away in Rwanda