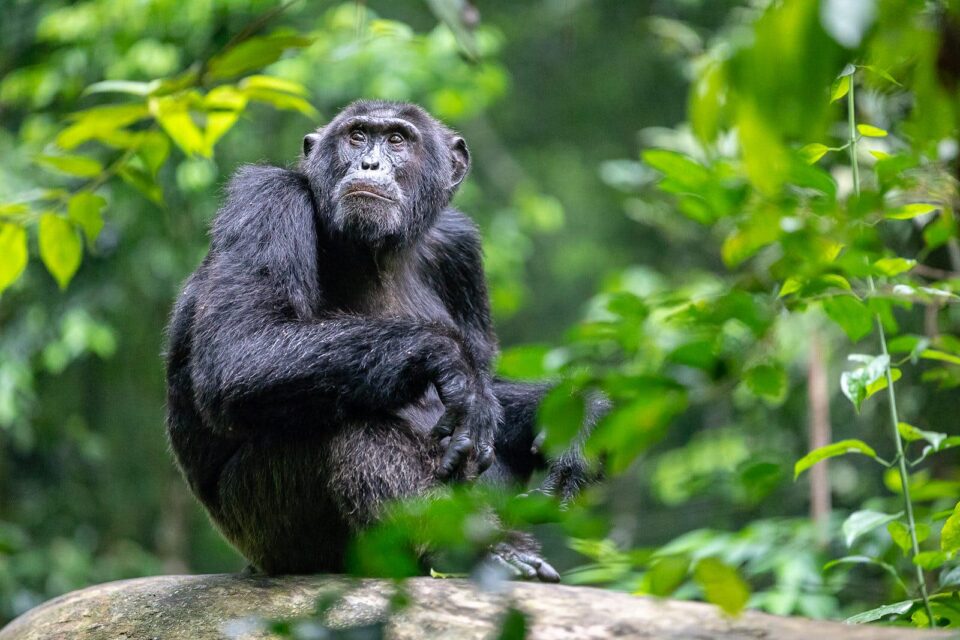 Meeting with the most sensitive and tricky chimpanzee primate species is the most exciting moment you experience and be left with no hopes of regretting why you spared your time and money for this great visit, these exciting primate species are herbivorous in nature feeding on young bamboo shoot and stem, tree leaves, flowers, sugar canes, and fruits like mangoes, oranges, avocadoes, grapes, jack fruit, water melon, tomatoes, pineapples and more.

They are tailless, black in color and known to be feeding both on ground and up in the tree branches. Chimpanzee primate species are also popularly known to be the closest species to human being features with 99% similarity.

These great and spontaneous primate species are mostly found in the Eastern part of the African continent in countries like Uganda and Rwanda with Uganda dominating the league of hosting highest numbers of these Primates with over 1450 species only found in Kibale Forest National Park.

Doing either Chimpanzee tracking or Chimpanzee habituation experience is the best way of meeting with these endangered primate species in Africa, the difference between these two activities is the period of time allowed while in the presence of these primate species whereby for the tracking its usually one hour permission allowed for you and the habituation experience its usually four hours permission or if interested you can be in the jungle for a full day while dwelling with them and experiencing their way of living.

Put it in mind that like gorilla trekking even Chimpanzee tracking and habituation experience requires you to buy a permit which issues you permission for the activity and their prices vary according to the destination you are to track these chimps.

Doing a combined Chimpanzee tracking safari is a great experience for you to have at hand because you are left with a lot of information to spread and you also get opportunities of comparing and contrast since you get engaged with varieties of different Chimpanzee primates, looking forward for this safari its better you start in Rwanda “The land of a thousand hills” and finish in Uganda “The Pearl of Africa”.

Stepping in to Africa for the combined Chimpanzee tracking safaris, Rwanda is here for you to experience these great primates in the Jungles and you will arrive in at Kigali airport where the driver from Eco Tours Rwanda will be waiting you for transfer to Kigali city for dinner and an overnight stay.

Next day early in the morning those on self drive embark the 4×4 wheel drive safari jeep heading to Nyungwe Forest National Park where these fantastic primates are only found while in Rwanda, Nyungwe Forest National Park is found in the South Western part of Rwanda characterized with thick tropical rain forest, montane forests, Savannah grasslands and woodland plus fertile swampy areas.

Reaching Nyungwe Forest National Park the popularly known activity is Chimpanzee tracking since its recorded with different chimp primate species and this involves moving in a group with a park ranger guide heading into the Jungle in search of these tricky primates which is associated with sighting of other touristic features which include big tree species, insects like Butter flies, tsetse flies, Reptiles like snakes, lizards and different bird species recorded sightable.

Other primates in Nyungwe include Vervets, Baboons, Colobus monkeys like Black & White, Red and more. The other activity to do in Nyungwe forest national park after chimpanzee tracking is the canopy walk, Chimpanzee tracking in Nyungwe costs $90 USD per person. After all sessions in this park next step is descending back to Kigali city such that you cross to Uganda for more varieties of Chimpanzee primates either via Katuna or Cyanika border.

This park is highest at the park’s northern tip plus being the wettest area receiving mean annual rainfall of up to 1700mm mostly during March – May and September – November, its climate is generally pleasant with mean annual temperature range of 14-27 degrees celicius, these temperatures are highest in the south where the terrain drops down on to the hot rift valley floor and forest gives way to open grassland.

The best way of reaching Kibale Forest National Park in the South western part of Uganda 26km south east of Fort portal town from Kampala is either from the North via Mubende and Fort portal or from South through Mbarara and Kamwenge but the northern approach is considered to be shorter and quicker with 300km tarmac road running to Fort portal followed by 36km on murram to Kanyanchu river camp which is regarded as the primary centre for tourism activities in Kibale Forest National Park.

Chimpanzee tracking in Kibale Forest National Park costs $200 USD per person and the habituation experience goes for $250 USD per person. After your Chimpanzee tracking in Kibale other activities done include Bigodi wetland walk which provides you with opportunities of sighting different bird species recorded in this park plus other primates which include Red Colobus monkeys, Black and White Colobus monkeys, Vervets, Baboons and more.

You can finish your tracking experience in Ngamba Island Chimpanzee Sanctuary which is located on the waters of Lake Victoria since your visiting means a lot to their well-being. This protected area is located on Kome islands 23km southwest of Entebbe and it was established in October 1998 with the main interest of providing home to the rescued orphaned and uncared Chimpanzee primates, currently over 49 Chimpanzee primate species are protected in this area.

This Sanctuary is usually accessed by use of a boat since it’s located on waters of Lake Victoria and the starting point is in Entebbe- Nakiwogo or if not that you go luxuriously by air transport since private charters are always arranged from Entebbe airport or Kajjansi airstrip. Reaching Ngamba Island Chimpanzee Sanctuary the activities done include Chimpanzee feeding, Car giving, Cage cleaning, preparing of feeds plus long-term Volunteering. After Ngamba experience next step is descending back to Entebbe for your return flight or overnight stay and this marks the exclusive end of your Uganda tour throughout the year.