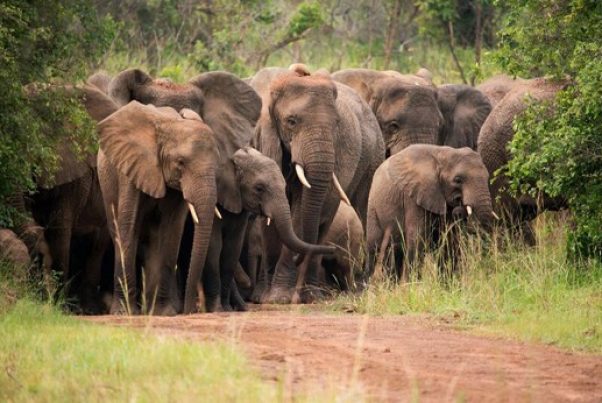 Rwanda, officially the Republic of Rwanda, is a landlocked country in the Great Rift Valley, where the African Great Lakes region and East Africa converge. One of the smallest countries on the African mainland, its capital city is Kigali.

One of the oldest rain forests in Africa, Nyungwe is rich in biodiversity and spectacularly beautiful. The mountainous region is teaming with wildlife, including a small population of chimpanzees as well as 12 other species of primate, including the L’Hoest’s monkey endemic to the Albertine Rift. With 15 trails, along with various other activities, visitors can choose to sample the delights of the forest or indulge themselves for a week or more in one of Africa’s most stunning forests.

The bird watching is among the best in Africa with 322 bird’s species including Red-collared Babbler and 29 other Albertine Rift Endemic species. Butterflies are also a common sight, with at least 120 species.

There are 75 known mammals in Nyungwe, such as the cerval cat, mongoose, Congo clawless otter and leopard to name but a few. Many tend to be shy so sightings are luck of the draw.

Memorable and photogenic moments include walking up to the Isumo waterfall or along the Canopy Walk suspension bridge. Tea plantations border the edges of the park, with a habituated troop of Ruwenzori colobus monkeys at Gisakura as well as forest fringe birds.

Lake Kivu in the west of Rwanda is surrounded by magnificent mountains and has deep emerald green waters covering a surface area of 2,700 km2. It is Rwanda’s largest lake and the sixth largest in Africa.

Rubavu previously known as Gisenyi is a large town on the northern edge of Lake Kivu, an hour’s drive from Volcanoes National Park and the perfect place to relax after gorilla trekking safari experience. Once a colonial beach resort of note, Rubavu’s waterfront is lined with fading old mansions, hotels and trendy bars on the Lake shore, ideal for sun downer cocktails.

Karongi, half way along the lake, is a popular beach resort with hillsides covered in pines and eucalyptus serve as a backdrop to the sparkling lake. At dawn and dusk, the sound of local fisherman singing carries across the water as they paddle in unison.

From Rubavu in the north, the Congo Nile Trail extends 227 kilometres of breathtaking landscapes all the way to Rusizi in the south of Lake Kivu. The trail gently curves back and forth as it weaves through hills and mountains beside the lake with eucalyptus trees lining the road and every inch of the hills seemingly terraced with bananas.

The relatively warm and low-lying plains of Akagera comprise savannah, woodland, wetland and a dozen lakes. In partnership with African Parks, we aim to transform the National Park into a world-class location to experience a safari.

The largely open expanse is ideal for game viewing, and we are taking steps to ensure the Big Five roam the park in greater numbers over the course of time. A family of lions from South Africa is settling in well, and breeding successfully, and 18 eastern black rhinos have also been reintroduced.

A boat trip on Lake Ihema is also a highlight of any visit to Akagera, with its large pods of hippos, Nile crocodiles and abundant water birds on the island in the middle of the lake.

Situated in the far northwest of Rwanda, Volcanoes National Park protects the steep slopes of this magnificent mountain range – home of the endangered mountain gorilla and a rich mosaic of montane ecosystems, which embrace evergreen and bamboo forest, open grassland, swamp and heath.

Volcanoes National Park is named after the chain of dormant volcanoes making up the Virunga Massif: Karisimbi the highest at 4,507m, Bisoke with its verdant Crater Lake, Sabyinyo, Gahinga and Muhabura.

Tracking endangered mountain gorillas through the mysterious intimacy of the rain forest, alive with the calls of 200 species of colorful birds and chattering of the rare golden monkey, is only one of the truly unique experiences in the area