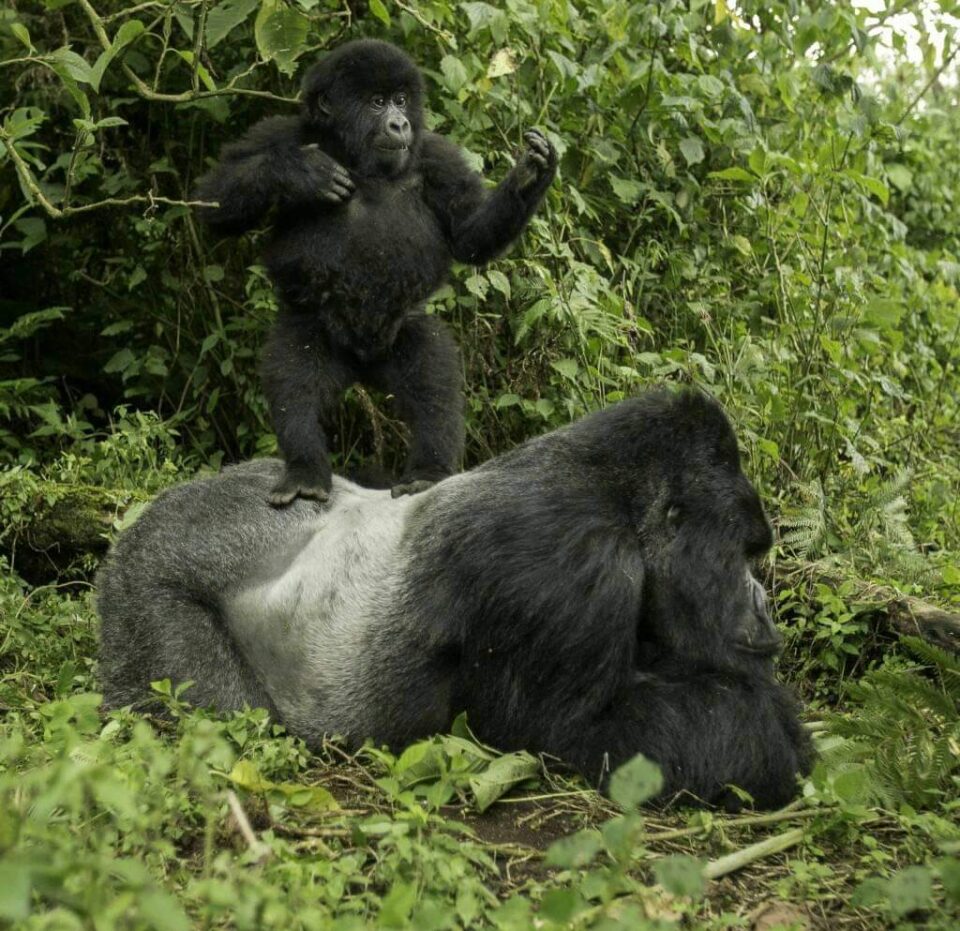 Planning to visit Rwanda and willing to experience gorilla trekking tours in Volcanoes National Park. There are various gorilla families to visit and you can either do single, double or triple gorilla safari experience.

Named after the Silver back Titus, the Titus group is the original family was born during DR, Dian Fossey’ study research at Karisoke in the late 60’s. Titus’s gorilla lost his family to poachers including his father, Titus was raised by unrelated male gorillas. According to Dian Fossey Titus the infant gorilla survived and grew to father the latest gorilla families.

This is the most popular family with approximately 42 members before it split. This was the focal point of Dr Diana Fossey study during her time in Rwanda from 1967 to 1985. In 2008 this family had numbered 42 individuals, this later split into 2 as it had grown big. The breakaway group was later known as Susa B or Karisimbi group. Susa A group is well known for its playful twins of Byishimo & Impano and was named after the Susa River that drains through their home range. The group is composed of 33 members including 2 silver backs and inhabits the forests on the lower slopes of Mt. Karisimbi.

Sometimes referred to as Susa B, the group split from the original Susa in 2008. It is made up of 16 members including 2 silver backs. it’s the hardest to track as it inhabits the upper slopes of Mt. Karisimbi at an altitude of 4507m. The group has established their home high in the upper slopes and is suitable for trackers interested in serious hiking

Amahoro is a Kinyarwanda word to mean serenity, as the name goes, the family is known for its peacefulness which on the other hand has caused its silver back Ubumwe to lose some members into another group called Umubano. Amahoro means ‘peace’ and the group has lived to the expectations of her name and is regarded as the most peaceful group. It is composed of 18 members including 2 silver backs. It’s on Mt. Bisoke slopes where this group established their home.

This family broke away from Ubumwe silver back as a result of constant fights between Charles and Ubumwe the two head silver backs; Charles consistently challenging the supremacy of the leader Ubumwe. Charles eventually succeeded in breaking away with some members hence forming Umubano group. The group is composed of 13 members including 2 silver backs and its name means ‘living together’.

The nearest gorilla family and easiest to track inhabiting the gentle slopes between Mt. Sabyinyo and Mt. Gahinga. The group is popular for its giant Alpha silver back known as Guhonda which has kept its main challenger, Ryango out of the family to remain as a lonely silver back. The group is composed of 13 members including one silver back after another was exiled from the group. The leader of the group; Guhonda is the largest silver back in the park weighing about 220kg. The group was named after the Sabyinyo volcano that means the ‘old man’s teeth’.

This group is named after the initial family individual who were 13 at the time of habituation. The group was initially led by a silver back called Nyakarima but was later over thrown by Agashya meaning the ‘News’ which is now the leader and the family was named after him. Today the family has grown to 27 members including one silver back (Agashya). The group occupies the same territory with Sabyinyo group but sometimes Agashya takes the family deeper into the mountain when it senses danger.

This is a migrant group from Democratic Republic of Congo which was named after its dominant silver back called Kwitonda which means the ‘Humble one’. Because of its migration background, the group wonders in the lower slopes of Mt. Muhabura and like Karisimbi group, it is difficult to track as it sometimes moves to the upper slopes. The group is composed of 23 members including 4 silver backs.

This family was formed in 2006 by some members of Sabyinyo group and others from 13 group (Agashya). More gorillas have joined in and now the group is numbers 16, members including one silver back. The group derived its name from its formation process that was out of luck. Hirwa means ‘the Lucky one’ and as luck has it, the group got twins in 2011. Hirwa group inhabits the foothills of Mt. Sabyinyo to the side of Mt Gahinga bordering Uganda.

Named from a Kinyarwanda word ‘Ugenda’ to mean ‘on the move’ or ‘mobile’. The ugenda group is unique always roaming from place to place. It consists of 11 members including 2 silver backs and wonders around Karisimbi area hence very difficult to track since it has no permanent home.

This group was formed as early as 2007 by Bwenge, and named after him the group’s dominant silver back, after he had left his Natal group and was joined by females from other groups. The group occupies slopes of Karisoke volcano between Karisimbi and Bisoke mountains and had witnessed dark times when its 6 infants died. The group has however recovered and now has 11 members including one silver back. Bwenge is a Kinyarwanda word which means ‘Wisdom’ and it’s no wonder that this was the group that featured the Movie ‘Gorillas in the Mist’.

In conclusion, with the description given, you should have a good picture of the characteristics and nature of each gorilla group and are in position to choose which gorilla family to track on your Rwanda tour while in Volcanoes National Park.